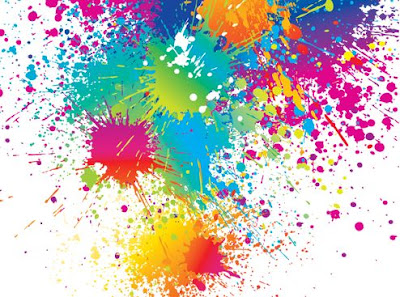 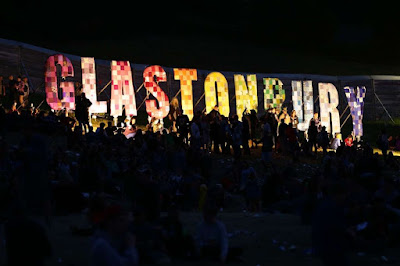 To all who've returned from Glastonbury,
And are now in a wifi zone.
With hazy heads, several showers later,
And finally charged up the phone.
While you were gone, (it feels like ages,)
There's been a few changes round here.
So join me now, let's take you through stages,
It's a lot with post-festival fear.
The Pyramid Stage had a new Headliner
With yes to Brexit vote.
While you were up in the Healing Fields,
The economy's not stayed afloat.
Cameron stood over in Paine's Ground
And said he'll be heading off soon,
He'll leave Article 50 for the next guy,
Poisoned chalice and silver spoon.
Meanwhile, up at the West Holts Stage,
A surprise appearance showed up,
Of deep wounds that were ripped wide open,
Then, casual racist remarks.
Yep, they took it back to the old skool peeps,
They took it back to the start.
In terms of things regressing,
Feels like we're back at Noah's ark.
Then, over at the Other Stage,
Labour MPs busted shapes.
Pleaded a vote of no confidence,
Mass exodus, helluva scrape
For a movement that's been needed some time,
But one-liner men are loved here,
Watson was chilling with you at the time,
He was in the fields, tweeting a beer.
While you were in Arcadia
Dancing off the day,
We were over at Pennard Hill
Where our fears weren't yet allayed.
Nigel Farage rolled on in,
Said 'you haven't worked a day in your lives'
To the leaders of the EU,
Who told him his win was based on lies.
Scotland are well up for leaving,
And Alyn Smith got a standing ovation
For his passionate 'I beg you' speech.
Sturgeon reckons they'll be an EU Nation.
Meanwhile over at Avalon,
We petitioned for a second go,
Some are saying they regret leaving,
But it looks like the answer's 'no.'
Boris has been lining things up
For his go at that big top spot,
While Northern Ireland wonders at borders
And how long peace has got.
Finally we end up at The Park,
And try to take it all in,
Maybe if we had Eavis as PM
We'd be in with a chance of a win.
So now you've returned from Glastonbury,
Get yourself some chill.
There's a lot of work to be done here,
With living, loving will.

Written with a heavy heart, this poem is about the outburst of racist comments we're hearing this week. This is displacement. This is home. This needs changing.
Love x x

I, like many others, am deeply concerned about the rhetoric around the Brexit Campaign and win.

This poem is the result.

My Two Penneth worth on the EU Referendum 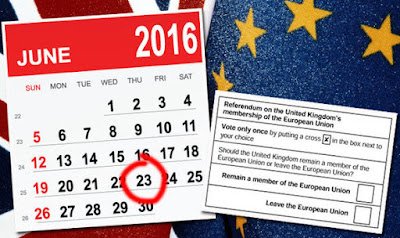 We've watched the debates, read articles and know just who to quote,
Yet here we are, with confused promise, our voice a tick-box vote.
The future of our country, we feel, is now perched in our hands,
Between logistics and statistics, we stagger to take a stand.
And you there Mr. Pundit, in your enlightened frequency,
Could you tell me how the forecasts look on just what it is to be free?
With all the impassioned predictions of what the outcomes could be,
Will today's broad-stroke promise fade to tomorrow's obscurity?
Brexit calls out now's the time to stand on our own two feet,
Tells us the system's not working, claims we're better to retreat
Back to our wonderful island, where our economy and rules are maintained,
Smudging barely dried newspaper ink on how taxes were retained.
The Vote Remains say to stick with it, the solution isn't to split.
The empire days are now long gone, let's dig back to the root of it.
That the EU is a united, diplomat ideology,
Yes, but it's borders' prisoners, we still call refugees.
Now I can't help but notice the tendency creeping in
Of superiority in each stance, it'll only be polarising.
Between justifications, simplifications, recriminations and frustrations,
We distort the ramifications of this big decision we make.
Between condemnations, obliterations, mitigations and accusations,
The chance of equal emancipation groans for compassion's sake.
The system as it stands, is one of imperfection.
But to my mind, change is only made in positive connection.
So, let's vote on the premise of potential to achieve,
Knowing it's the start of a bigger task from which there's little reprieve.

The other question here, is how we'll fix a broken system.
Not to stake claim, or the blame game, call up Clarity, and enlist 'em.
We're standing at the crossroads of a crucial, complex debate,
Where systemic change of our paradigm ultimately seals our fate.

Sneak Preview: Chapter 1 of The Epic of Anthropia

In honour of National Refugee Day, here's a sneaky glimpse at the draft version of Chapter 1 of my current writing project 'The Epic of Anthropia'. It's my first attempt at a full-length story through poetic convention.

Epic Poetry characterised some of the earliest works of western literature. Rooted in Ancient Greece, this genre includes such seminal and cornerstone works as Iliad, The Odyssey, Mahabharata, Divine Comedy & Paradise Lost.

As a Modern Epic Poem, 'The Epic of Anthropia' uses the principles of Epic Poetry to tell a thoroughly modern (and indeed timeless) story, based on current global affairs. It's the story of migration and displacement, told through its hero 'Anthropia'; which translates as 'humanity'. It attempts to evaluate some of the most urgent changes of our time through the eyes of humanity to all sides of the debate.

The turning of this tide couldn’t come quick enough.
Pale hope glimmered wide eyes, as they sat shoulder to shoulder, erect and wired.
Fighting their tired limbs; limp with heaviness and drained of tenderness.
Clenched hands desperately clutched the edge of their seats,
as aching hearts gripped onto any semblance of safety
of the old, wooden dinghy, that creaked and leaped the brave edge of rolling waves.

Dozens of strained bodies clambered into the rickety raft.
Their hopeful hearts lost in anticipating mouths.
The night sky hung low; thick with haze.
It felt like they would need to dig through layers of burning rubble,
choking its potent fumes, before sight of a star’s glimmer.

The cool indifferent faces of the Guardians-of-Destiny loaded more and more on.
As if they no longer saw faces, just goodbye waves, and tidal waves and cash exchanges.
Their functionary, casual call-out to passengers to make room where there wasn’t any,
the only real decipherable sound amidst mass groans and sniffs.
As yet more and more climbed on, weakened writhing bodies held their breaths.
They swayed with the first trembling rhythm of the start of a seemingly infinite sea
their souls saw before their eyes.

The whipped seabreeze gave goosebumped skin that freezing-burning feeling
that follows a scorching day.
And it felt like an electric rod with each prod of stray, tightened limbs,
clamouring for the same few centimetres.

A wail from the soul pierced the night,
“No, please don’t make me, I don’t want to get on, I can’t get on.
There’s too many, too many!”
The functionary, casual, calm response of the Guardians-of-Destiny reverberated again;
“You can swim, you won’t get your money back.”
Then, amongst slams and bangs, whispers and moans, no more words could be heard.

At the heart of the crowd, Anthropia sat,
This; what he hoped would be the final part of his odyssey
that had rolled on for more years than he ever had anticipated.
His restless fingers examined marks in his wrists where the skin had cut raw, now indented.
He had been a wealthy man, and still held himself as such,
though that seemed a distant memory now.
As he pondered, intently gazing around him, his eyes grew accustomed,
and he studied desperate silhouettes in the lilting darkness.
Row upon row of narrow outlines of drawn faces.
Their tight cheeks clenched the tentative balance of fear and faith.
A few possessions slung in now damp bags
tucked around their knees and feet to cushion the blow of too many blows.
The howls of night and barbed dreams.

This boat carried some women and children but mostly men;
young professionals and well-educated,
now glazed with the bewilderment of a saga that for too long had dominated,
and removed all traces of choice, and with it, at every step; the feeling we all call home.
Anthropia saw it in the eyes of men in his immediate view.
He had seen it many times before and felt it himself.
It churned his gut and sparked a furnace in his belly,
(That much at least, couldn’t be extinguished.)

He couldn’t see much else,
but the occasional heartfelt cry of a baby flew out and fled the darkness.
And muffled sounds of materials rustled with their mother’s rocking,
which each time followed, until they were calmed.
As for the older children, even they had stopped curiously questioning.
They had already seen enough that deemed silence was the wisest move.
Anthropia; as in any other, was alone in this crowd,
and in this moment he felt it more acutely than he had in a long time.

“No lights” bounced the instruction over and over, churning up the night.
Then “yalla yalla; come on, come on!”
The rushed call-out to drifting tide.
The hollow-eyed flee of a $2,000 ticket.
“I’m from Gennaíos”; the temporary password to freedom.
The place we all wish for, and what they hoped would be their ultimate destination.

The journey was estimated to take five days.
They didn’t know if they would make it through the night.
The small raft finally pulled out, it’s over-filled sides groaned
and mounted the glistening first few waves of a roaring tide.
Anthropia retrieved a golden trinket from his pocket.
In the darkness, he pressed it into the palm of his hand.
For a good time he sat there, stoic and silent, its imprint forming,
and a familiar pressure that felt almost comforting.
as if it held secrets, or answers, or some sort of courageous wisdom.
Then, he tucked the key securely back in his pocket.
He gazed out to the future,
Soon there would be light. 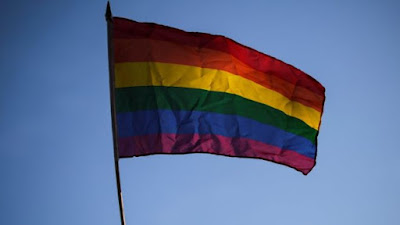 Rainbow flags light the air tonight,
Major cities flock together this night.
They tell us to have pride, because love is love.

The radio is alight with newsflash daze,
Reeling over rubble remnants of gun blaze,
We need to have pride, because love is love.

Was it self-loathing or a pact with ISIS?
Innocent blood and a Judas kiss.
Seeing we need pride, because love is love.

Questions tumble over from the latest find,
Is the world dying, could we be more kind?
Trying to have pride, because love is love.

As they're laid to their final resting place,
There's only one thing we can possibly chase
That it's time to have pride, because love is love.